Hey there. I’m back after the Xmas break spent in my home country. Surprisingly enough, I’ve managed to squeeze a bit of writing in between parties, family meetings and general time off. As usual, that means not so much contents stuffed into the maws of the attention-greedy social beasts. There have only been scraps over the last three weeks, and then a burst of micro-writing in the last two days. Part of the process of getting used to the real world after the holidays.

First things first, though. Before I could come back home, I had to leave, obviously. En route, I managed to wring another bit of unexpected poetry out of the airport tedium.

The riotous sun broke into a busy airport hall. After one golden minute, it left; no one gave a shit.

When I arrived to the country that spawned me, there was some time for visiting places long unseen. That can bring memories, like the ones condensed in the following haiku. 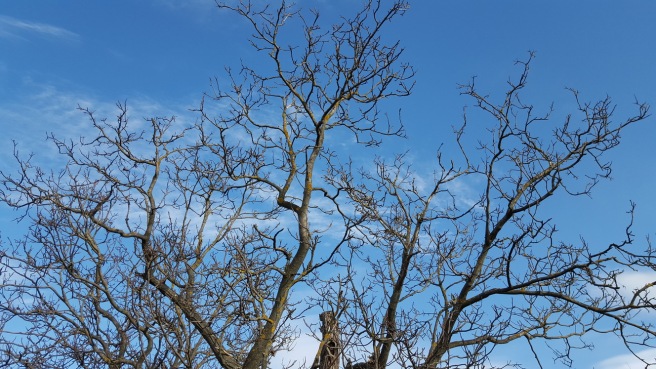 Old walnut branches
over the gates of childhood
would they bear me still?

Two slow, off-line weeks followed then. Full of contemplation, of course. The cats trying to scratch their way out of my head during few hazy hangover mornings were just pure coincidence. Maybe I just should have contemplated slightly less, now that I think of those days again.

Anyway, when the year was over, I managed to post another haiku evidence of my life on a dodgy train connection. 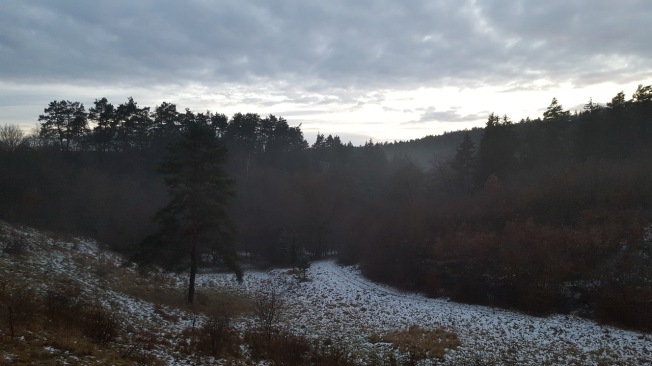 Nothing special, just an evening walk. Yet it was a goodbye to another year that felt nicer than most I can remember.

The last days of the winter break were too busy for me to bother posting anything. When I got back home this weekend, however, it felt like catching up would not be an issue at all. Good weather is to blame, mostly.

See for yourself – clear skies. When this happens during Irish winter, you grab people who are dear to you and run out to enjoy the outdoors before another storm smacks you in the face. The simple joy of flying a kite in such weather can trigger rather surprising things. Like this little ode to my family.

Soaring, flipping, tumbling
towards the seas of
whiteblue skies,
flying in the sun.

Two co-pilots
stoking the lighthouse
through my ups and downs.

Now back to the nature-inspired micro-poems and story stubs.

Tickling each other
with fingers all but touching
skeletal respect.

I have to say that taking these pictures of tree crowns was not only due to one of my momentary whims. The photos were, to some extent, inspired by Robert Macfarlane and his “crown shyness” tweet.

The rest is another ode – to the setting sun, apparently. There was no such intention in my head but looks like I just couldn’t help it.

He thought the Golden Queen would fall into his mighty arms, spread to hug the skies. She ditched him though, and slowly sank into the Mother Ocean’s embrace.

Twig nation led by stick prophets wanted to burn nobly in the furnace of sunset. They couldn’t climb over the moss-grown bones of Earth though, and ended up rotting in dirt instead. Like everyone else.

That’s it for now. Off to work proper from tomorrow on. Let’s see what kind of inspiration that type of routine brings. Surely it will be less boring than blue skies and beautiful sunsets!

A sheepish earthling, sinking swimmer, dejected scientist, struggling partner, fearful father... and a dubious writer. I write mostly to stop things bothering me. Which is just another type of bother, but one I'm getting used to. On particularly delusional days, writing even seems to make me happy. But that would be enough about me. Your turn. Do you like jokes that are perhaps a little ill-conceived? Are you obsessed about matters of death and life? And how about the universe that most likely doesn't give a shit? Still interested? Read on, then. You've been warned. View all posts by viitya